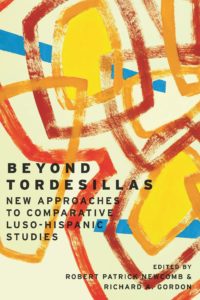 A new volume edited by Robert Patrick Newcomb and Richard Gordon was released in October 2017. Bringing together young and established scholars, Beyond Tordesillas: New approaches to comparative Luso-Hispanic Studies, seeks to consolidate the important research being done on the connections between Spanish- and Portuguese-speaking worlds on both sides of the Atlantic. This volume builds on an understanding that Iberian and Latin American cultures are inherently transoceanic, as early modern eras have been intrinsically interconnected. Beyond Tordesillas discusses how colonization is a global issue, specifically in post-colonial evaluations.

This volume’s contributions range topically across continents, from the Iberian Peninsula to Latin American countries. It also ranges across genres, with studies that analyze fictional narrative, music, performance, and visual culture. Beyond Tordesillas forcefully challenges the disciplinary, and somewhat arbitrary, boundaries that have separated Hispanic and Luso-Brazilian studies for far too long.

Robert Patrick Newcomb’s profile in the IStReS “Who is who”