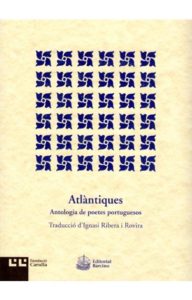 A new facsimile edition of Ignasi Ribera i Rovira’s Atlàntiques. Antologia de poetes portuguesos has just been published by Ed. Barcino (Barcelona). The anthology Atlàntiques was originally published in 1913 and is one of the most important milestones in the history of the relations between Catalonia and Portugal. For this anthology, Ribera i Rovira gathered works by Portuguese poets from the 19th century onwards, from Almeida Garrett to Teixeira de Pascoaes. Furthermore, he proposed the creation of a new literary and cultural movement using Portugal as a model: the Enyorantisme, a Catalan version of the Portuguese Saudosismo.

This new edition of the anthology includes an extensive introduction by Víctor Martínez-Gil, professor at the Department of Catalan Philology of the Universitat Autònoma de Barcelona, and one of the most distinguished experts on the literary and cultural relations between Catalonia and Portugal.

Víctor Martínez-Gil’s profile on the IStReS “Who is who” page.