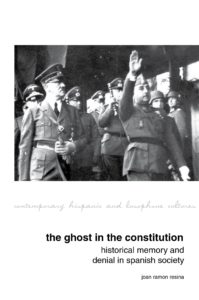 Embracing a philosophical and ethical dimension, The Ghost in the Constitution. Historical Memory and Denial in Spanish Society provides a deep, thoughtful reflection on the concept of ‘historical memory’ and its political use in Spain. The book analyzes specific ‘traumatic’ historical episodes such as the bombing of Guernica, the post-war exodus to France and internment in concentration camps or exile. It also explores the origins of symbolic violence and “negationism” in the post-Franco era.

Joan Resina is the Director of the Iberian Studies Program at the Freeman Spogli Institute for International Relations and Professor of Iberian and Latin American Cultures and Comparative Literature at Stanford University, United States. Recent books by Resina include Barcelona’s Vocation of Modernity: Rise and Decline of an Urban Image (2008), Del Hispanismo a los Estudios Ibéricos. Una propuesta federativa para el ámbito cultural (2009), and Josep Pla: Seeing the World in the Form of Articles (2017).

Joan Ramon Resina’s profile in the IStReS “Who is who”